Numerous studies will be completed during the next few years, and many new studies are being developed. 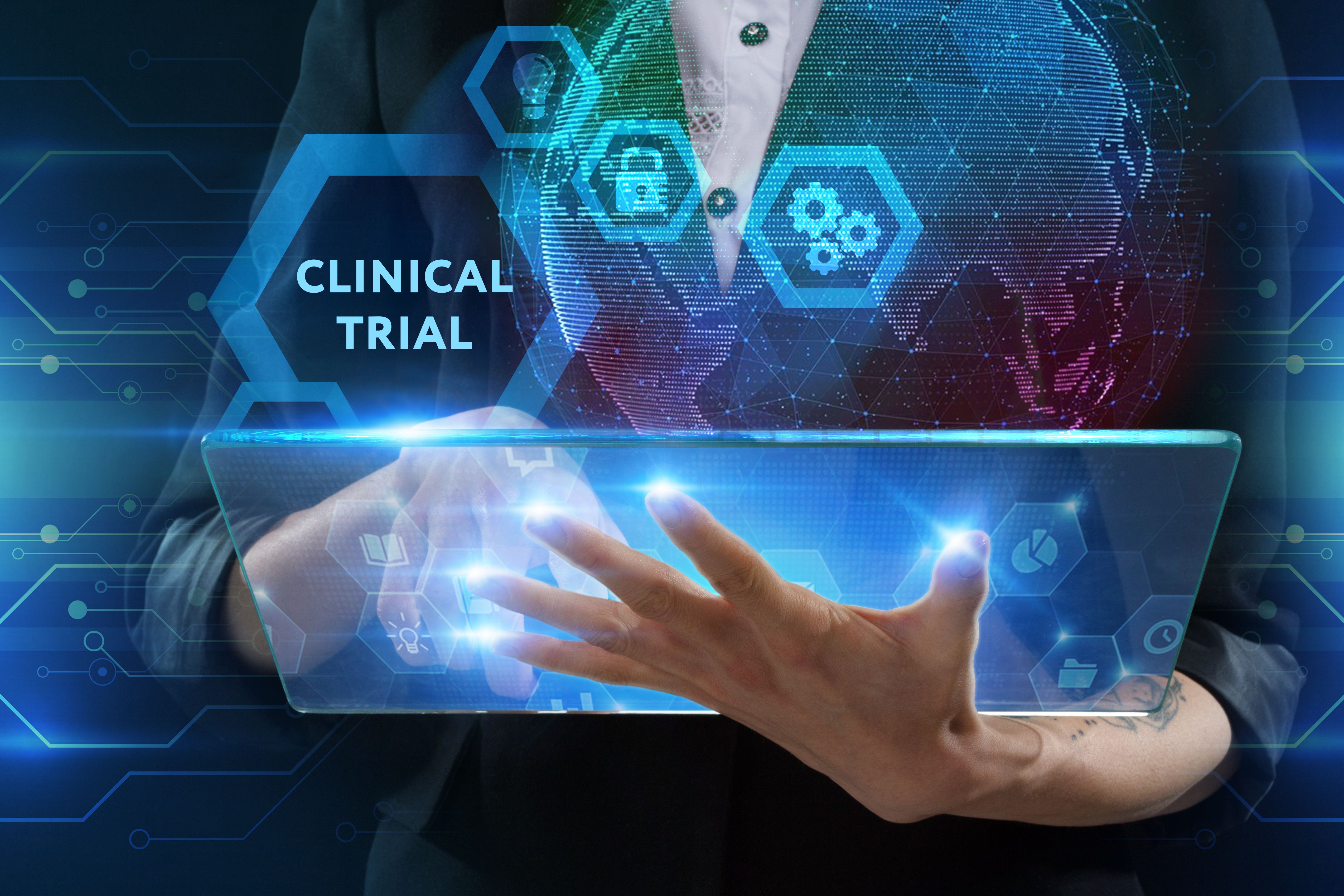 This article was reviewed by Daniel F. Martin, MD.

The Diabetic Retinopathy Clinical Research (DRCR) Network, established in 2002 by the National Eye Institute, has orchestrated numerous randomly assigned clinical trials over the years that initially focused on improving the treatment of diabetic retinopathy (DR).

Over the past 3 years, however, that focus expanded to include studies of all retinal diseases, and in 2019, a new name, the DRCR Retina Network, was adopted to reflect its new mission.

“Over the past 17 years, this highly collaborative network has conducted more than 30 DR multicenter studies and published more than 100 reports from 160 clinical sites and boasts more than 1800 members,” said Daniel F. Martin, MD, who along with Jennifer Sun, MD, MPH, currently serve as the network chairpersons for the DRCR Retina Network. Martin is chairman of the Cleveland Clinic Cole Eye Institute, the Barbara and A. Malachi Mixon III Institute Chair in Ophthalmology, and a professor of ophthalmology at the Cleveland Clinic Lerner College of Medicine at Case Western Reserve University in Cleveland. 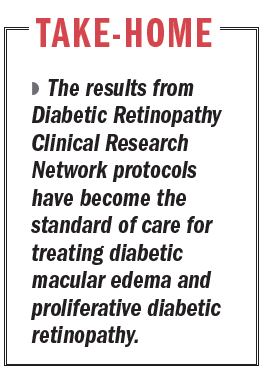 This research group has struck gold over the years with a number of high-impact studies that have helped to define the standard of care of diabetic retinopathy. At a recent Vision Research Symposium sponsored by the Cleveland Eye Bank Foundation, Martin described 5 of the most important findings from DRCR Retina Network studies.

DRCR Protocol I.1 The seminal finding of this study was that anti-VEGF agents are the most effective treatment for diabetic macular edema (DME). In this study, 854 eyes (vision of 20/32-20/320) with DME were randomized to treatment with laser, ranibizumab (Lucentis, Genentech), ranibizumab with laser, or triamcinolone with laser. After 5 years of follow-up, investigators found that when compared with laser, ranibizumab provided significant (P < .001) increases in vision either as monotherapy or when combined with laser. “Anti-VEGF drugs are now standard of care, and Protocol I was the first published large randomly assigned clinical trial that showed just how effective these drugs are for DME,” Martin said.

DRCR Protocol I.1 The need for injections decreased dramatically over 5 years. “This was a remarkable finding, and something that we did not expect. In protocol I, patients received a mean of 9 injections in the first year,” Martin said. “Following this intensive treatment, only 2 to 3 injections were required in year 2, and only 0 to 1 injection per year in years 3, 4, and 5. DME can be a relatively self-limited disease, and that may be particularly true with appropriate treatment.”

DRCR Protocol T.2 In this study, the 3 available anti-VEGF treatments, aflibercept (Eylea, Regeneron Pharmaceuticals), bevacizumab (Avastin, Genentech), and ranibizumab, were compared over a 2-year period showed that patients with visual acuity from 20/32 to 20/40 did equally well with any of the 3 drugs. But for patients with visual acuity of 20/50 or worse, aflibercept was superior to the other 2 drugs.

As a result of this study, Martin explained, any of the 3 drugs are appropriate choices for patients with DME and vision of 20/40 or better, although bevacizumab is much less expensive than the other 2. For those with visual acuity of 20/50 or worse, aflibercept is the most effective drug for reducing DME and improving visual acuity. Bevacizumab and ranibizumab are still effective in these eyes, and it may still be reasonable for cost purposes to start with bevacizumab since the absolute difference between drugs in the proportion of patients who gained 10 or more letters was only 10%.

An ongoing DRCR study (Protocol AC) is evaluating whether starting with bevacizumab and then switching to aflibercept if the desired result is not achieved is an effective strategy that does not compromise longer-term visual outcomes.

DRCR Protocol V.3 All major clinical trials that have evaluated the efficacy of anti-VEGF drugs for DME have only included eyes 20/32 or worse.

“But what about those eyes that have DME on OCT [optical coherence tomography] but visual acuity of 20/25 or better?” Martin asked. “Do those eyes need to be treated? Are long-term visual acuity outcomes compromised if we do not treat? Until Protocol V, we did not know the answer to this question that is commonly encountered in clinical practice.”

In Protocol V, 702 eyes with center-involved DME and vision of 20/25 or better were randomly assigned to initial observation, laser, or treatment with aflibercept. The study found that 2-year visual outcomes are excellent whether eyes are initially treated with anti-VEGF versus laser or observation with deferral of anti-VEGF until visual acuity worsens. Observation was just as effective as immediate treatment, and over a 2-year period, the long-term outcome was not compromised by delaying treatment until necessary.

DRCR Protocol S.4 It has been known for years that retinal neovascularization is exquisitely sensitive to anti-VEGF agents. However, the question of whether or not repeated anti-VEGF injections could be used effectively for the treatment of proliferative diabetic retinopathy (PDR) had not been answered until Protocol S. In Protocol S, patients with PDR were randomly assigned to anti-VEGF treatment with ranibizumab following a defined algorithm versus panretinal photoacoagulation (PRP).

At 2 years and at 5 years, anti-VEGF treatment and PRP were found to be equally effective with no difference in long-term visual acuity. A major concern that remains in eyes treated with anti-VEGF agents alone, however, is the risk of progression of PDR in these eyes if they are lost to follow-up. In the first year of Protocol S, patients required a mean of 9 injections to control their proliferative disease, and many needed continued dosing throughout 5 years for the disease to remain quiescent. Since anti-VEGF treatment does not permanently improve the underlying ischemia that produced the retinal neovascularization, missing injections could lead to the recurrence of active disease and the possibility of catastrophic consequences, as have been documented in a few small case series. The specific role of anti-VEGF to treat PDR is still evolving, but in selected cases, it can be a reasonable choice that also reduces the risk of DME.

The future of the DRCR Retina Network is bright. Numerous studies will be completed during the next few years, and many new studies are being developed. Planned studies include those that evaluate the use of fenofibrate to reduce diabetic retinopathy, long-term age-related macular degeneration outcomes, prevention of radiation retinopathy, vitreoretinal surgery for epiretinal membranes, and low-dose bevacizumab compared with laser for zone 1 retinopathy of prematurity.

Martin has no financial interest in this subject matter.