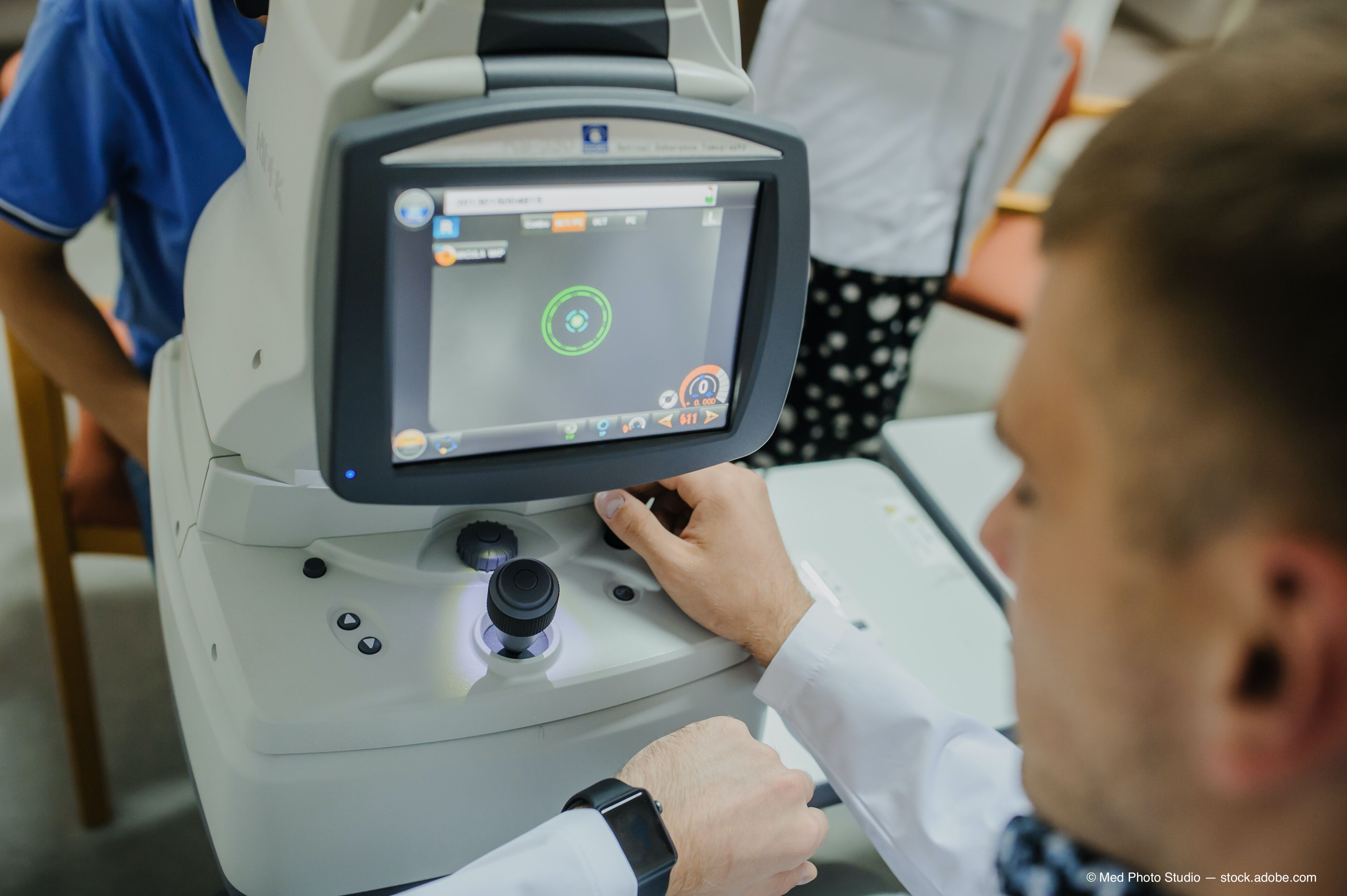 Baseline VA is one of the best predictors of ultimate visual outcomes with anti-VEGF injections in neovascular age-related macular degeneration (AMD),1 and these findings validate previous work that earlier detection leads to better outcomes.

Retrospective study design
Titled “Early Detection of Second Eye CNV in nAMD Leads to Better Visual Acuity and Fewer Injections at Month 12,” the study was a retrospective chart review of patients with nAMD from a single retinal practice between June and July 2019.

A total of 50 patients met this inclusion criteria with an average age of 80; 64% were female.

Primary endpoints were mean VA at diagnosis at 1 year, as well as the mean number of injections in the same time period.

Results: Better visual acuity, fewer injections
Mean visual acuity at the time of CNV diagnosis in the first and second eyes were 20/68 and 20/30, respectively (p < 0.05).

The second eye also received fewer anti-VEGF injections (5.72 injections vs. 6.25 injections; p = 0.5), although the injection difference was not statistically significant.

“It is important to note that the second eye vision remained better than the first eye vision throughout the study, with a statistically significant difference and a p-value of 0.017,” Ms. Holekamp said.

Figure 1 illustrates the time and months between baseline and final vision against the mean LogMAR vision for all 50 patients. 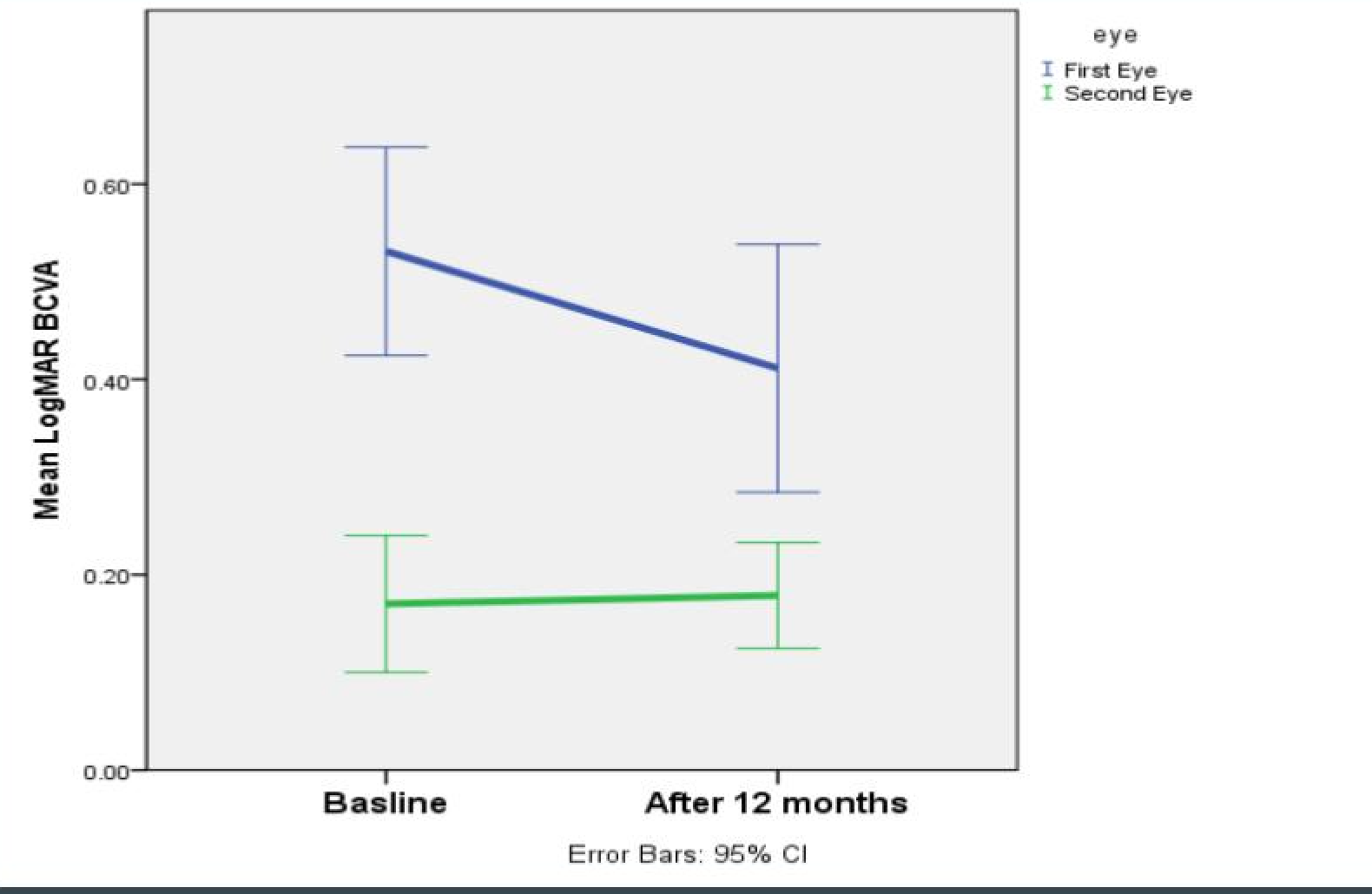 The results bore out with further follow-up as well. At 59 months of follow-up in the first eye, mean visual acuity was 20/63 after a median 18 injections. At mean second eye follow-up of 38 months, visual acuity declined to 20/40 after an average of 11 injections.

However, she noted that the results are consistent with previous work, including the RENO study, which she said was presented at the ASRS and ARVO Annual Meetings in 2019.2,3

RENO was a retrospective study of 46 eyes from a single practice. At the time of CNV diagnosis, VA was 20/63 and 20/63 +2 for the first and second eyes, respectively.

Second eye CNV was detected when the first eye was being treated, and visual outcomes were ultimately better but with the same number of injections.

“One big difference between the RENO study and our study is that the RENO study did not catch a second eye involvement as early as this study,” Ms. Holekamp said. “Our practitioner treated patients monthly, emphasizing the importance of frequent OCTs of the fellow eyes to detect early conversion to CNV.”

Ms. Holekamp believes that frequent OCTs on high-risk, asymptomatic fellow eyes is key to earlier diagnosis and better outcomes in this patient population, but acknowledged that monthly imaging is burdensome for patients.

Home monitoring devices may reduce that burden once approved, she said.

2. Dang J, Khanani AM, Gahn G ,et al. Efficacy of the treat-and-extend regimen in the management of neovascular age-rerlated macular degeneration: 5-year results of the RENO Study. Presented at: Association for Research in Vision and Ophthalmology. April 28-May 2, 2019: Vancouver, Canada.