The eyeglasses were reportedly designed to help the wearer reach enlightenment and drive away evil, according to Sotheby’s London, which will host the auction next month. In ophthalmology, many devices used to treat patients in the early part of the 20th century have become collectible among ophthalmologists, including eyeglasses.

For the serious collector, Sotheby’s is offering two pairs of 17th-century eyeglasses that are expected to bring millions of dollars at auction next month. The jeweled spectacles, which feature lenses made of diamonds and emeralds rather than glass, are believed to have originally belonged to the Mughal royal family who ruled the Indian subcontinent.

According to Melica Khansari, senior press officer, Sotheby’s London, the glasses will be sold as two separate lots, but come from the same collection. The auction is set for at 1 p.m. BST (8 a.m. EST) Oct. 27. The eyeglasses will sell separately, and Sotheby’s estimates that the two sets of eyeglasses will sell for $2.1 million to $ 3.5 million, respectively.

The eyeglasses were recently on display in New York as part of a brief tour prior to the auction.

The eyeglasses were designed to help the wearer reach enlightenment and drive away evil, according to Sotheby’s Middle East Chairman Edward Gibbs, who told CNN the glasses are a very rare example of the Mughal jewelry craftsmanship in India.

Gibbs told CNN it is likely that the eyeglasses are one of a kind, and the rarity is enhanced by the size of the gemstone lenses. 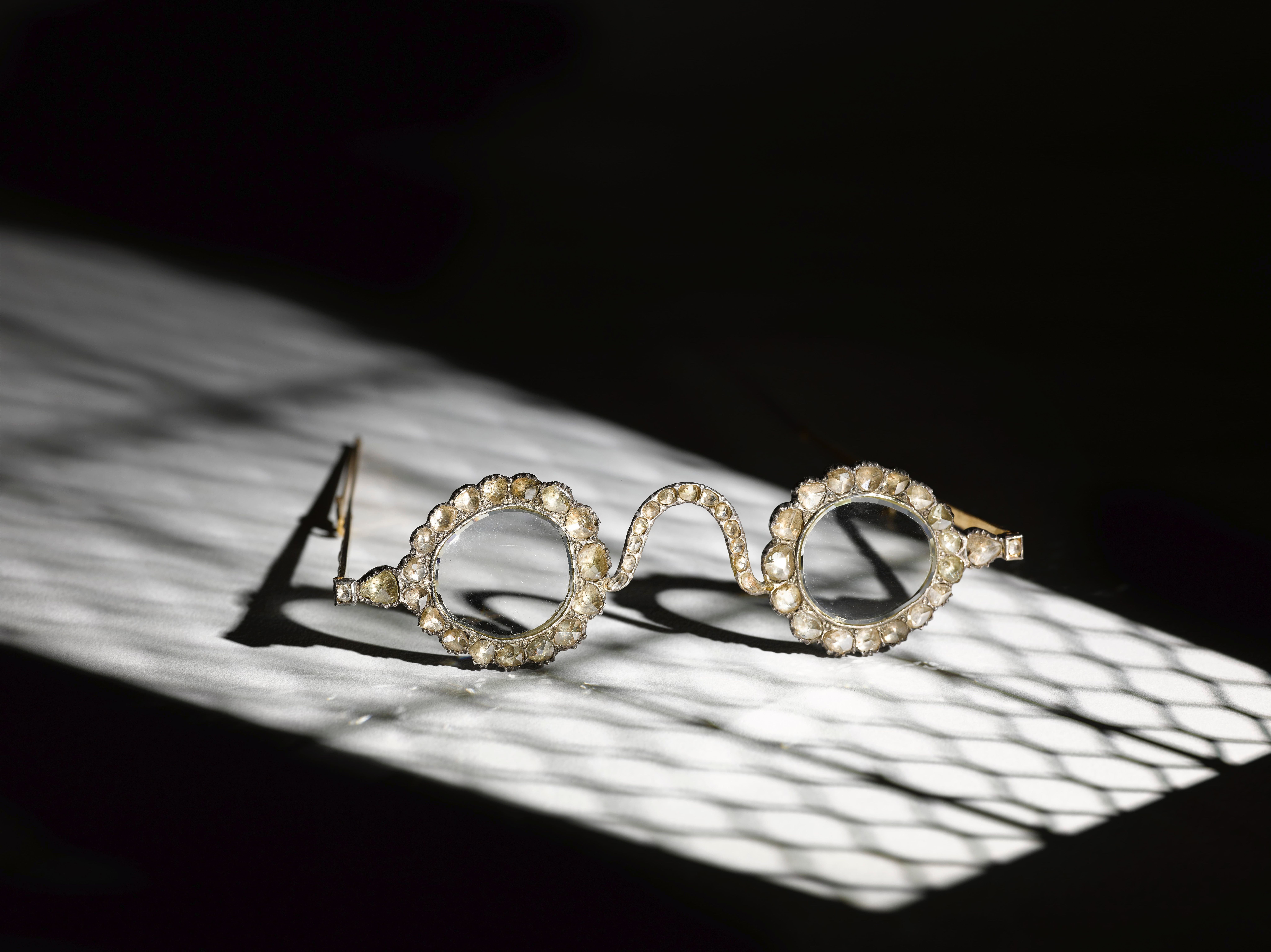 The lenses of the "Halo of Light" eyeglasses are believed to have been cut from a single 200-carat diamond. (Image courtesy of Sotheby's)

A pair of lenses, known as “Halo of Light” eyeglasses, is believed to have been cut from a single 200-carat diamond found in Golkonda, a region of what is now Andhra Pradesh and Telangana, India. Sotheby’s estimates that the original diamond was “probably the largest one ever found,” according to CNN. By comparison, the famed Hope Diamond weighs 45.52 carats.

The second pair of green lenses, known as the “Gate of Paradise,” is believed to have been cut from a Colombian emerald weighing in at more than 300 carats, Gibbs told the network.

Jewels were highly regarded in Islamic and Indian traditions, which were strongly associated with spirituality.

Gibbs told the network that diamonds are associated with the “light of heaven” and “enlightenment” of Indian society, as bright stones were believed to be “vehicles of star power” that could be a guiding force of the universe. 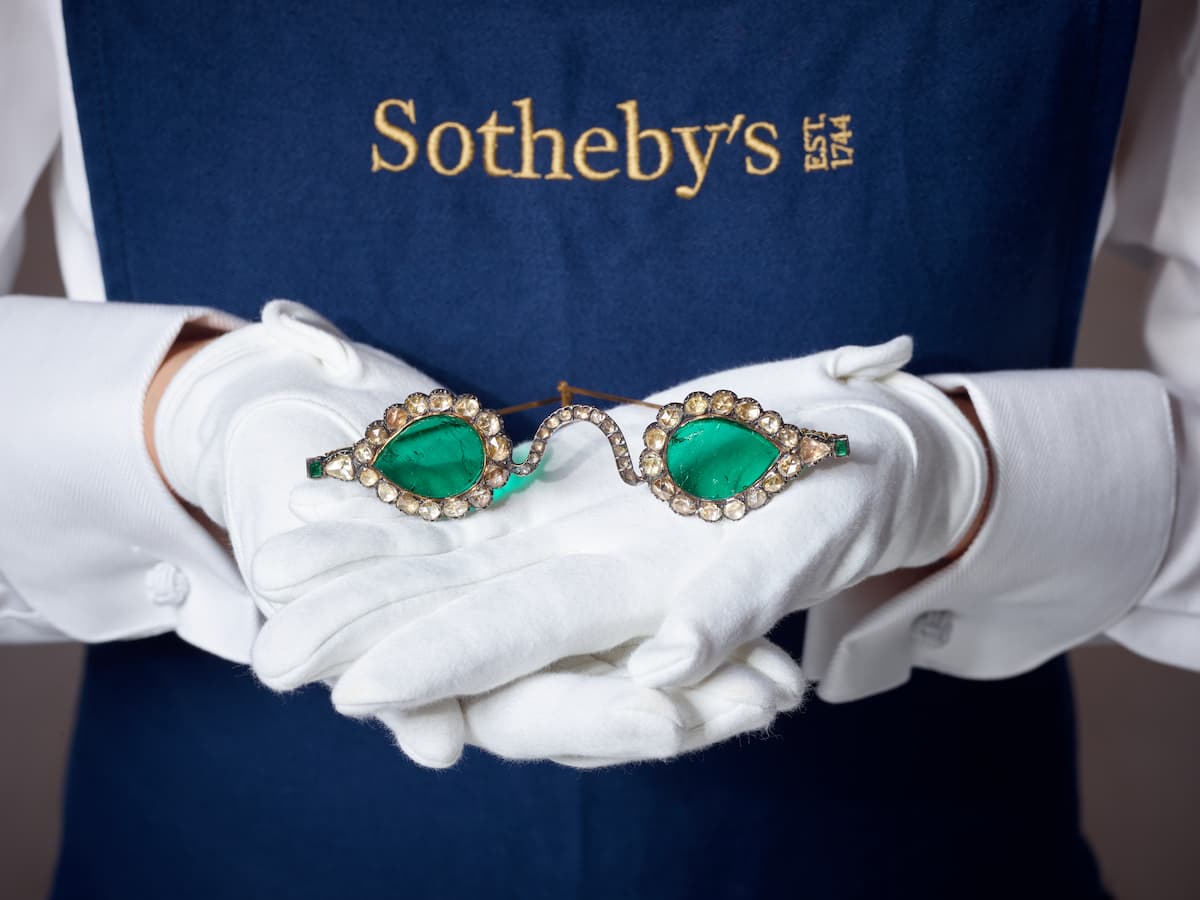 The "Gate of Paradise" eyeglasses are believed to have been cut from a Colombian emerald weighing in at more than 300 carats. (Image courtesy of Sotheby's)

Green is also a close color linked with Islamic paradise, salvation, and eternal life, a religion practiced by the rulers of Mughal. Therefore, seeing the world through these emerald-colored glasses has a special meaning.

Gibbs also told CNN that the arrival of Jesuit missionaries, some of whom wore pince-nez glasses (which balance on the nose and have no arms), may also have influenced the spectacles' original frames. In the late 19th century, however, both sets of frames were replaced with the current ones, which feature numerous rose-cut diamonds along the lens rims and bridge.

And while they may be centuries old, their shimmering frames and narrow silhouettes look strikingly trendy. It is easy to imagine these eyeglasses being worn by Lady Gaga or Elton John. Current celebrities often wear trendy eyewear, including members of the hip-hop group Migos, who are known for their diamond-studded Cartier eyeglasses. Model/influencer Kylie Jenner can often be seen wearing opaque gem-studded glasses on social media.

Collectable eyeglasses are not new to the auction block. In 2020, pair spectacles believed to have been owned by Indian independence leader Mahatma Ghandi sold at auction for $340,000, more than 17 times the original estimate.

A guide on how to bid in a Sotheby’s auction can be found here.