Expanding our vision of steroid-eluting implants

How long-term intravitreal steroid technology fits into a modern clinic.

Dexamethasone intravitreal implant 0.7 mg, which has a duration of effect of about 3 to 6 months, is indicated for diabetic macular edema (DME), macular edema following branch retinal vein occlusion (RVO) or central RVO, and noninfectious uveitis affecting the posterior segment.1

I have leveraged all 3 steroid-eluting implants in my clinical practice. Typically, these implants are used strictly for their indicated disease states (ie, fluocinolone acetonide intravitreal implant 0.19 mg for the treatment of DME). In other cases, I have found that an expansive understanding of disease indications invites use of a particular agent.

For example, use of a steroid-eluting implant in patients with chronic postoperative posterior-segment inflammation and/or cystoid macular edema that has not responded to topical corticosteroid/nonsteroidal anti-inflammatory drug therapy is within the boundaries of dexamethasone intravitreal implant 0.7 mg’s and fluocinolone acetonide intravitreal implant 0.18 mg’s uveitis indications, and may require us to put aside our assumption that these agents are only indicated for more conventional uveitis presentations.

Further, given the robust data sets from clinical trials that have assessed the safety and efficacy of these implants, we can proceed with treatment armed with knowledge of the spectrum of possible disease responses.

Among these 3, fluocinolone acetonide intravitreal implant 0.18 mg has most recently received approval by regulatory bodies, and we are learning more about its practical applications. With that in mind, I’d like to share 2 real-world examples of its use in patients with uveitis who underwent cataract surgery.

A 27-year-old White female patient with a medical history of medication-induced lupus presented to the clinic with blurry vision and bilateral floaters that had been present on and off for several years. The patient had previously been treated with combinations of topical and oral steroids, systemic immunosuppression, and multiple dexamethasone administrations.

Upon examination, it was determined that the patient’s best-corrected visual acuity (BCVA) was 20/70 OD and 20/50 OS, with intraocular pressure (IOP) measurements of 16 and 18 mm Hg, respectively. Although her anterior chamber was characterized as deep and quiet, vitreous cells were measured at 2+ in each eye, with vitreous haze at 1+ OD and 2+ OS. Bilateral epiretinal membranes (ERM) involving the macula were also observed. Lab work-ups were unremarkable.

After evaluating fluorescein angiography and optical coherence tomography (OCT) imaging results (Figures 1 & 2), I diagnosed this patient with bilateral pars planitis. The patient elected to discontinue systemic immunosuppression, citing multiple infections that arose during treatment that required hospitalization. Given that her disease had responded well to previous intravitreal corticosteroid injections, we determined that fluocinolone acetonide intravitreal implant 0.18 mg was an appropriate therapy.

Figure 1. Fluorescein angiography OD (A) and OS (B) at presentation depicted optic nerve head capillary leakage in the right eye and petaloid macular leakage bilaterally. These nonspecific findings are consistent with a diagnosis of pars planitis, given the unrevealing diagnostic work-up and presence of inflammatory cells within the vitreous cavity.

Figure 2. OCT imaging at presentation shows evidence of bilateral macular edema and ERM. Macular edema was more severe OD (A) than OS (B), which correlated with BCVA of 20/70 OD and 20/50 OS.

The patient adhered to a follow-up regimen similar to that described in the sidebar, “Follow-up regimens after implant administration.” At 6 months, BCVA had improved to 20/25 OD and 20/20 OS, and IOP measurements were 14 and 17 mm Hg, respectively. The patient’s anterior chambers remained deep and quiet, with no observable of vitreous cells or vitreous haze. The patient’s bilateral ERM were still present. OCT imaging depicted resolution of edema (Figure 3). The patient has since undergone bilateral cataract extraction with IOL placement, and will continue to be monitored.

Figure 3. OCT imaging at 6 months following Yutiq administration revealed resolution of macular edema OD (A) and OS (B). BCVA was measured as 20/25 OD and 20/20 OS.

An Asian woman in her mid-30s presented to the clinic with a history of unilateral undifferentiated pars planitis in her left eye. Although her overall medical history was unremarkable, she had a history of blurry vision OS that had been treated with a series of periocular and intravitreal injections of triamcinolone prior to her establishment of care with me. Her blurry vision was not connected to any known retinal vascular issues, and there was no reported history of vitreous haze, although documentation of her treatment history was somewhat scant. She was referred to my clinic 1 month after having undergone uncomplicated cataract surgery of the effected eye.

The patient did not respond well to oral steroids previously prescribed to her to manage her uveitis. A uveitic flare-up occurred 4 months after her initial appointment, and her visual acuity dropped (as it typically did during uveitis recurrence) to approximately 20/40 (Figure 4); significant vitreous haze was noted at this time. I administered dexamethasone intravitreal implant 0.7 mg, and visual acuity returned to approximately 20/20 and visual symptoms resolved. Uveitis recurred 6 months later, with visual acuity falling to 20/70. She received another dexamethasone intravitreal implant 0.7 mg and responded similarly to the first administration.

Figure 4. OCT imaging from a patient with a uveitic flare up. The poor image quality can be attributed to opacification and haze of the vitreous.

Given the positive disease response to a steroid-eluting implant, the patient elected for administration of the longer-acting fluocinolone acetonide intravitreal implant 0.18 mg. She received the implant 1 year after her initial presentation. In the approximately 2.5 years since receiving the implant, the patient’s uveitis has remained controlled (Figure 5). No IOP issues have been detected during monitoring appointments.

Not all patients are well suited for long-term steroid implants, particularly if it elutes drug over several years. Perhaps counterintuitively, patients who have difficultly attending follow-up appointments are poor candidates for a long-acting drug such as fluocinolone acetonide intravitreal implant 0.18 mg.

Although it may be tempting to consider fluocinolone 0.18 mg therapy for a patient with a poor follow-up record, thereby allowing a a continuous low dose of therapy regardless of their presence in the clinic, doing so may risk the development of IOP-related complications that are undetected and unaddressed in their earliest stages. In this instance, lack of adherence to follow-up may lead to permanent vision loss.

Given this dynamic, I only use steroid-eluting implants in patients with proven follow-up patterns. Fluocinolone acetonide intravitreal implant 0.18 mg’s official labeling includes a comprehensive list of contraindications.3

By the time patients with chronic inflammatory conditions reach our clinics, they are often frustrated, seeking targeted therapy, and eager to experience relief. In patients whose pathologies align with the approved indications of steroid-eluting implants, and whose history with steroids indicate that a disease response is likely, these therapies may offer consistent, long-term relief.

Do is in practice with the Retina Group of Washington in the Washington, DC, area, and is a clinical assistant professor of ophthalmology at the Georgetown University. 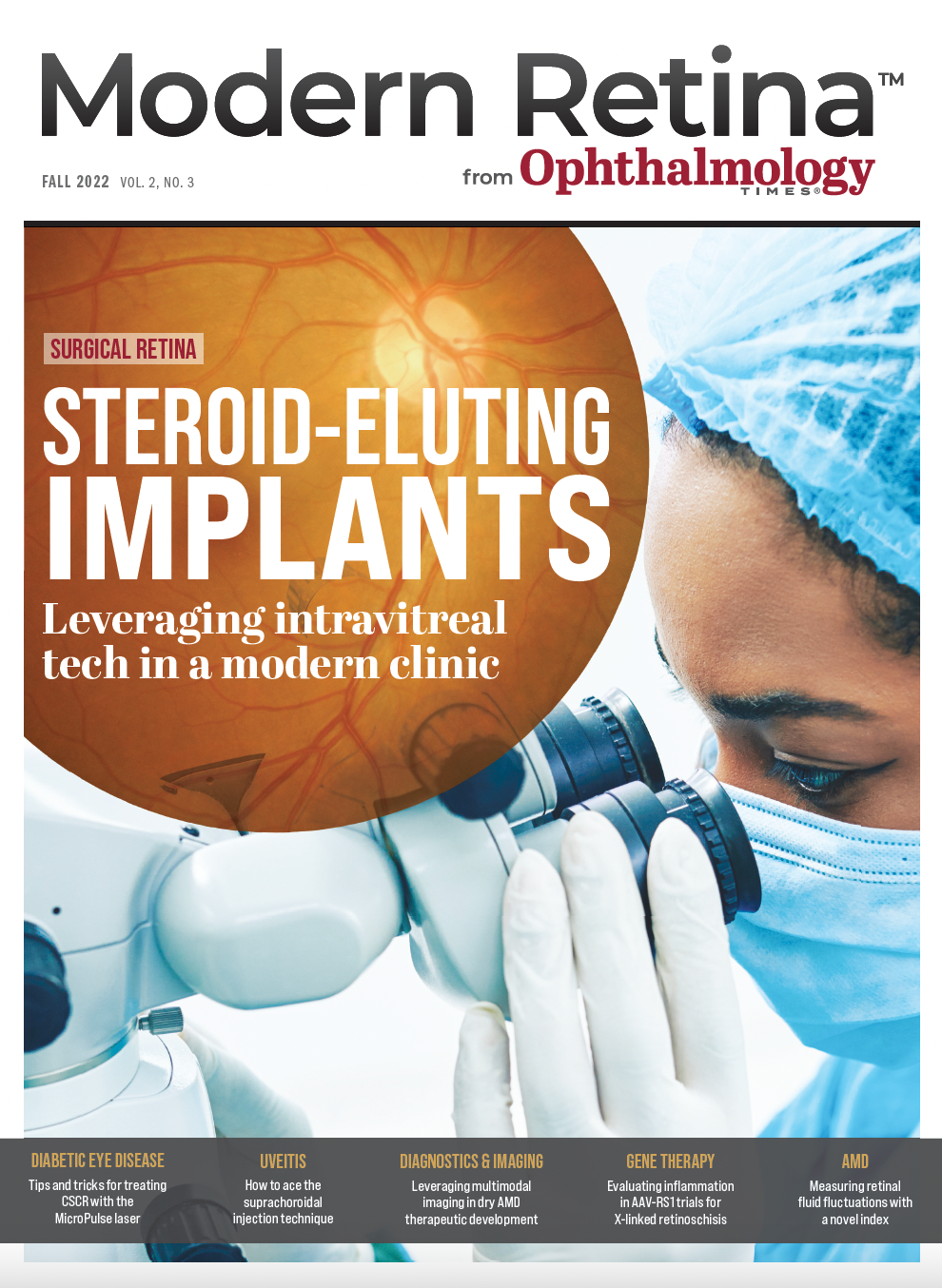