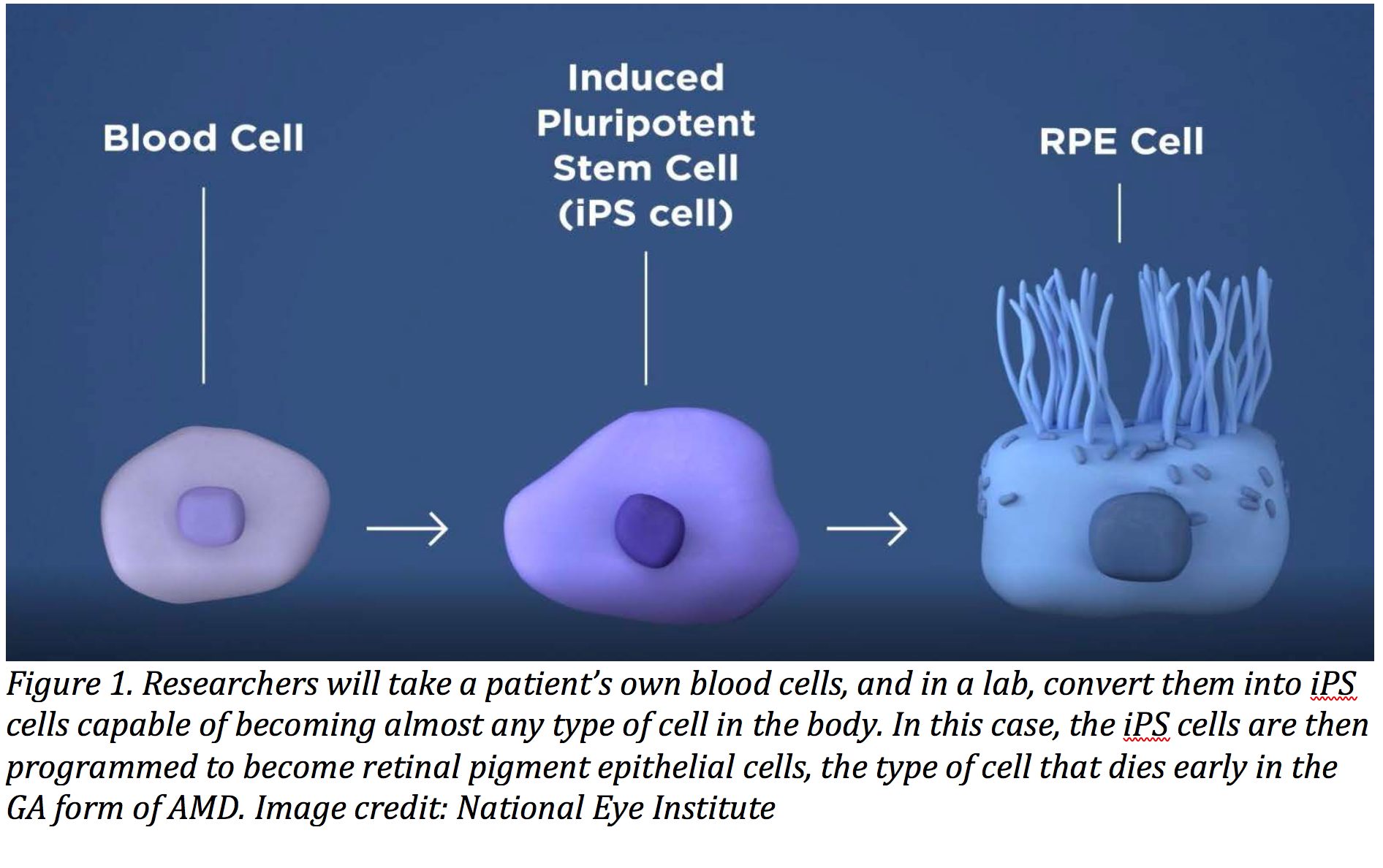 Researchers at the National Eye Institute (NEI) are launching a clinical trial to test the safety of a novel patient-specific stem cell-based therapy to treat geographic atrophy (GA), the advanced dry form of age-related macular degeneration (AMD), a leading cause of vision loss among people age 65 and older. The GA form of AMD currently has no treatment.

“The protocol, which prevented blindness in animal models, is the first clinical trial in the United States to use replacement tissues from patient-derived induced pluripotent stem cells (iPSC),” said Kapil Bharti, PhD, head of the NEI Ocular and Stem Cell Translational Research Section.

The therapy involves taking a patient’s blood cells and, in a lab, converting them into iPS cells, which have the potential to form almost any type of cell in the body. The iPS cells are programmed to become retinal pigment epithelial (RPE) cells, the type of cell that dies early in the GA stage of macular degeneration.

RPE cells nurture photoreceptors, the light-sensing cells in the retina. In GA, once RPE cells die, photoreceptors eventually also die, resulting in blindness. The therapy is an attempt to shore up the health of remaining photoreceptors by replacing dying RPE with iPSC-derived RPE.

Before they are transplanted, the iPSC-derived RPE are grown in sheets one cell thick, replicating their natural structure within the eye. This monolayer of iPSC-derived RPE is grown on a biodegradable scaffold designed to promote the integration of the cells within the retina.

Surgeons position the patch between the RPE and the photoreceptors using a surgical tool designed specifically for that purpose. (Figure 1)

In 2014, researchers with the NIH developed a technique to speed up the production of stem-cell derived tissues. The method simultaneously measures the expression of multiple genes, allowing scientists to quickly characterize cells according to their function and stage of development. The technique should help the researchers streamline efforts to use patients’ skin cells to regenerate RPE, the NEI said at the time.

“Progress in stem cell-based therapies has been limited by our capacity to authenticate cells and tissues,” Dr. Bharti said.

The stem cells Dr. Bharti used to make RPE are iPS stem cells, which are produced by reverting mature cells to an immature state, akin to embryonic stem cells. iPS cells can be derived from a patient’s skin or blood cells, coaxed into other cell types (such as neurons or muscle), and in theory, re-implanted without causing immune rejection.

His group teamed up with Marc Ferrer, PhD, of NIH’s National Center for Advancing Translational Sciences to develop a multiplex assay-a method for simultaneously measuring multiple genes per RPE sample in a highly automated fashion. The assay is based on a commercially available platform from the biotech company Affymetrix. In the assay, tiny snippets of DNA tethered to beads are used to capture RNA molecules-created when genes are expressed by cells in the RPE sample. Once captured, the RNA from distinct genes is labeled with a fluorescent tag.

In the animal study, Dr. Bharti describes tested the approach in rat and pig models.1 Ten weeks after the human iPSC-derived RPE patches were implanted in the animals’ retinas, imaging studies confirmed that the lab-made cells had integrated within the animal retina.

The investigators report the transplanted cells functioned properly. Immunostaining confirmed that the iPSC-derived RPE expressed the gene RPE65, suggesting the lab-made cells had reached a crucial stage of maturity necessary to maintain photoreceptor health. RPE65 is necessary for the regeneration of visual pigment within the photoreceptors and is an essential component for vision.

Further tests showed that the transplanted RPE cells were pruning photoreceptors via phagocytosis, another RPE function that helps keep photoreceptors healthy. In addition, electrical responses recorded from photoreceptors rescued by RPE patches were normal; whereas photoreceptors treated with a control empty scaffold had died.

Under the phase I/IIa clinical trial protocol 12 patients with advanced-stage GA will receive the iPSC-derived RPE implant in one of their eyes and be closely monitored for a period of at least one year to confirm safety.

A concern with any stem cell-based therapy is its oncogenic potential: the ability for cells to multiply uncontrollably and form tumors. In animal models, the researchers genetically analyzed the iPSC-derived RPE cells and found no mutations linked to potential tumor growth.

The use of an individual’s autologous (own) blood cells is expected to minimize the risk of the body rejecting the implant. Should early safety be confirmed, later study phases will include more patients to assess the efficacy of the implant to prevent blindness and restore vision in patients with GA.